It takes between 15 hours 30 minutes to over 17 hours to complete the train journey from Nakhon Si Thammarat to Bangkok. It is a long journey. The advantage of travelling from Nakhon Si Thammarat to Bangkok by train rather than flying is that the cost of a 2nd Class train ticket is less than half the cost of a plane ticket, and if you book a sleeper berth you save the cost of paying for a hotel for the night and wake up rested for a full day in Bangkok.

There are two direct train services a day from Nakhon Si Thammarat to Bangkok.

Use the Search Box below to find your tickets from Bangkok to Nakhon Si Thammarat:

For this journey you have a choice of booking 1st Class A/C Sleeper berth, 2nd Class A/C Sleeper berths and 2nd Class A/C Fan Sleeper berths online through the Search Box. You can also choose to travel in a fan cooled seat. Fan cooled seats are cheap and not that popular for this long journey so you should have no difficulty simply turning up a short time before either train departs and buying a ticket at the counter in the station. You may not be as lucky with booking sleeper berths to Bangkok because both trains pass through the busy station of Surat Thani and Chumphon on route and there is a high demand for sleeper berths by passengers joining the train at these two stations.

Trains from Nakhon Si Thammarat travel a distance of 816 km to reach Bangkok at averages speeds of between 48 kph and 52 kph. The Southern Line is Thailand is for most of the way a single track. Plans to install a second track running alongside the current track are being finalised at the moment, but until then the speed of this journey is severely restricted nearly all the way to Bangkok by the need for trains travelling in opposite directions to wait in sidings, and station, for one to pass the other before carrying on the journey. 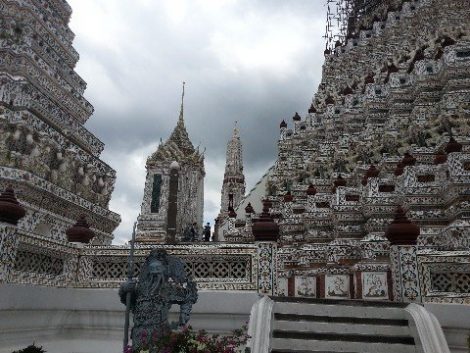 Ceramic tiles cover the chedi of Wat Arun in Bangkok

Trains from Nakhon Si Thammarat are normally fairly empty for the first part of the journey. Both Train #174 and Train #86 fill up on route. The first major station where passengers board the train is Surat Thani. Surat Thani train station is the connection point between the railway system and the ferry ports of Donsak where dozens of ferries arrive everyday from the islands of Koh Samui and Koh Phangan. Further along the track another large group of mostly foreign travellers will join the train in Chumphon, which is close to the various ferry piers serving the popular island of Koh Tao. The also passes through Prachuap Khiri Khan and Hua Hin which are also popular tourist destinations.

Train #86 is the best train to take from Bangkok to Nakhon Si Thammarat. Train #86 is an Express train which means not only does it travel faster than Train #174 (which is a ‘Rapid’ service) but it has better quality newer train carriages and 1st Class cabins. The carriages used on ‘Rapid’ services in Thailand tend to be the oldest of the carriages in service on intercity trains and they do not have any 1st Class cabins. 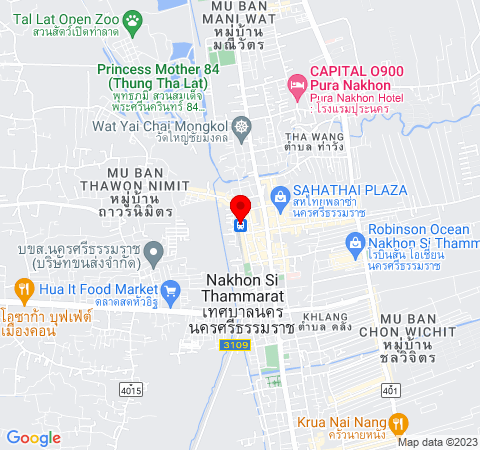 There are 6 ways to travel from Bangkok’s main train station, known locally as Hua Lamphong Station, to your final destination in Bangkok:

For more information see our guide to transport to and from Bangkok train station.

Next find out How to Get from Bangkok to Siem Reap the Easy Way!