Train travel from Bangkok to Lamphun

By train it takes between 10 hours 30 minutes and 14 hours to complete the 729.21 km journey from Bangkok to Lamphun, which is the fourth to final stop on Thailand’s Northern Railway line which runs from Bangkok to Chiang Mai.

There are 5 direct trains per day from Bangkok to Lamphun.

Use the Search Box below to find your train tickets from Bangkok to Lamphun:

Train #9 (departing at 18:10) uses the newest and best train carriages operated on scheduled services by the State Railways of Thailand. However, if you want to transport a bicycle or other large item you need take either Train #109, Train #13 or Train #51 because these trains have freight cars in which you can transport a bicycle. Click on the link in red to read more about transporting bicycles on trains in Thailand.

Train tickets purchased on online for the Bangkok to Lamphun route cost 200 to 250 THB more per ticket than purchasing the same ticket at the train station in Thailand.

Depending upon when you plan to travel, you may not be able to buy a train ticket to Lamphun on the day of travel, particularly a ticket for a sleeper berth. Trains in Thailand tend to become very busy during public holidays when Thai people use the trains to travel home from Bangkok to spend the holiday in their home town or village. The train tine to Lamphun can also become very busy during the high season for foreign tourism, which large numbers of visitors travelling on the Northern Line (which runs via Lamphun) from Bangkok to Thailand’s second city, Chiang Mai. If you plan to travel in a 3rd Class seat then generally there is no need to book ahead.

Lamphun is a small nondescript town which occupies a significant place in the early history of Thailand, and is the location of one of the most important temples in Thailand, Wat Phra That Hariphunchai, which features on the reverse side of 1 baht coins. 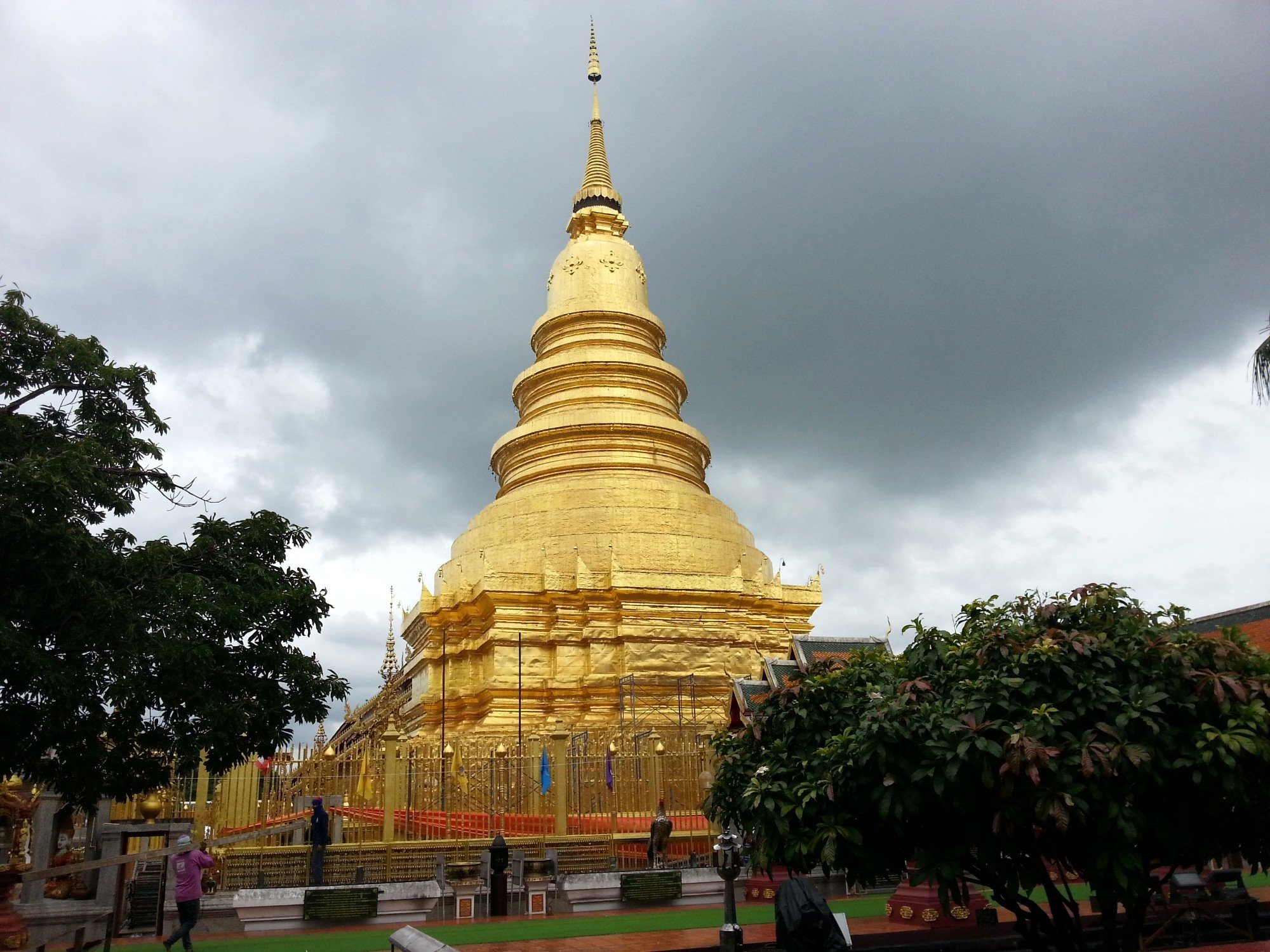 Wat Phra That Hariphunchai in Lamphun

Lamphun was first settled in the 8th Century by the legendary Queen Chama Thevi as as the capital of the last Mon Kingdom in Thailand, the Kingdom of Haripunchai. The Mon people were the early settlers of what is modern day Thailand, along with large parts of Myanmar and Cambodia, and unlike other dominant groups in South East Asia during the first millennium, such as the Hindu worshipping Cham and  Khmer peoples, they embraced the Theravada Buddhism of Sri Lanka, which later became the main religion in Thailand. In some respects Lamphun and Queen Chama Thevi are considered the foundations of Thailand’s Buddhist church and this is the reason why Wat Phra That Hariphunchai, which was founded in the 8th Century, is so important to modern day Thai Buddhists. Lamphun has many other temples and an old city wall and moat, and not much else besides. If you have a genuine interest in Thai history and Thai temples then Lamphun is a must visit destination, if not, then you are probably better off carrying on a further 22.21 km from Lamphun north along the Northern Railway Line to Chiang Mai which has more diverse range of attractions.