Sikhoraphum is a small town in Surin Province on Thailand’s North Eastern Train Line, located between the major towns of Surin and Sisaket. Sikhoraphum Railway Station is located very close to Prasat Sikhoraphum temple which means that travel by train is a convenient way to get from Bangkok to Prasat Sikhoraphum because you don’t need to arrange any transfers to get to the temple.

There are 8 direct trains a day from Bangkok to Sisaket Sikhoraphum:

Use the search box below to buy your train tickets from Bangkok to Sikhoraphum.

The best quality train service on this route in Train #23 which uses the most modern passenger train carriages in use on Thailand Railway Network. All carriages on train #23 are air-conditioned sleeper carriages with first-class compartments available for those who book early enough to secure a 1st Class compartment before they all sell out.

Buy your train tickets online is 250 to 300 THB more than expensive than buying them at a train station in Thailand. However, this is a small cost compared to the cost of missing travel connections or hotel booking because the train you want to travel on is fully booked.

Certain seat types are only available on particular trains. Use the Search Box above to check which seats are available.

Prasat Sikhorapum is temple built by the Khmer people at some point in the 12th Century during the reign of Khmer King Suryavarman II in whose reign much of Angkhor wat was also constructed. Prasat Sikhorapum is open every day from 08:00 to 17:00 and admission costs 50 THB per person. 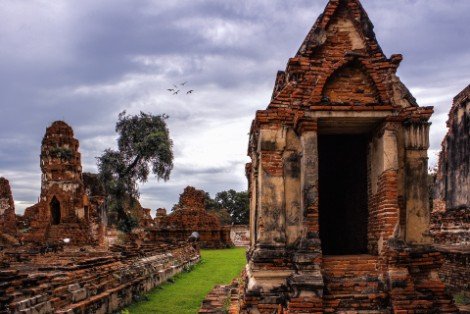 Prasat Sikhoraphum consists of 5 towers made of sandstone on a stone base. The tallest tower prang is located in the centre of the temple and is 32 metres tall. The temple was originally built as a Hindu temple although it was re-purposed for use as a Buddhist temple in the 16th Century. The most interesting features of the temple are the reliefs depicting Hindu deities Shiva, Brahma, Ganesh, Vishnu and several devas, who are benign mystical being from Hindu mythology. Prasat Sikhoraphum receives relatively few visitors which makes the temple much more enjoyable for those who make the effort to go there.

Next read about Train times from Bangkok to Ubon Ratchathani