Two Sections of the Line to Chiang Mai 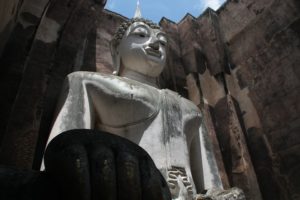 Phitsanulok is near to the Sukhothai Historical Park

Building the first section will involve laying 380 km of railway track from Bangkok to Phitsanulok, about half way. Phitsanulok is itself a major transport hub and the stopping off point for a visit from Bangkok to Sukhothai by train. Finishing the remaining section from Phitsanulok to Chiang Mai will require another 292 km of track.

The Japanese Railway’s Bureau’s thinking is that the section of the route up to Phitsanulok will be more profitable in terms of both rail passengers and the development of the area around the stations and along the new track.

At Thailand Trains we think that the Japanese are right and that this is the best approach. If you look at a map of the Thailand’s Northern Train Line it is fairly obvious that the first section of the route goes through the biggest towns, such as Ayutthaya and Lop Buri, whilst the second half of the line goes through a less densely populated part of the country.

Also the Bangkok to Chiang Mai is not part of the plan to create the Pan Asia Railway Network and there will be no further onward rail services to connect with. The big question is whether as a destination Chiang Mai can attract enough visitors to make the high speed rail link to the City financially viable. Probably not. There are though lots of places on the first half of line that passengers already travel to in sufficiently great numbers to make the construction of a high speed line more viable.