Use the Search Box to find ticket your tickets from Hat Yai to Hua Hin.

The best trains to book from Hat Yai to Hua Hin are Train #36 (departing at 18.10) and Train #32 (departing at 18.45). Both trains feature 1st and 2nd Class A/C Sleeper Seats. The fastest train from Hat Yai to Hua Hin, which train is Train #42 (departing at 16.23), is not the best train to catch because it arrives in Hua Hin at the inconvenient time of 02.18 which a little late in the evening to check into a hotel and a little too early in the morning to find anywhere open to eat and drink except a 7-Eleven convenience store.

Booking online in advance is slightly more expensive than buying your ticket at the Train Station. However, the advantage of booking your train tickets from Hat Yai to Hua Hin in advance online is that your guaranteed the seat of your choice on the train you plan to take. 3rd Class Fan seats are normally available at the day of travel, however, 1st Class and 2nd Class A/C Sleepers on the Hat Yai to Hua Hin route often sell out in advance of the day of travel.

You can takes bicycles on all the trains from Hat Yai to Hua Hin except for Train #43 and Train #32. All of the other trains from Hat Yai to Hua Hin have a freight car in which you can (for a small fee) transport bicycles. Train #42 is a sprinter train and Train #32 is one of Thailand’s new style of trains, neither of which has a freight carriage. For more information about transporting bicycles see our Guide to Carrying Bicycles on Thailand Trains.

Hat Yai Railway Station is a city centre train station located  in the busiest part of Hat Yai City to where the most popular hotels, restaurants and shopping malls are located. Most overnight visitors to Hat Yai tend to stay close to the train station which makes travel by train to and from Hat Yai a convenient option.

Hat Yai Bus Station, however, is 2.9 km away from Hat Yai Railway Station. If you are travelling into Hat Yai via the main bus station then take a local van or a motorbike taxi from the bus station to the train station as it is too far to walk

If you do need to take public transport from Hua Hin Train Station there are always plenty of taxis waiting in front of the train station. None of the taxis operating from the train station appear willing to use their meters so you need to agree a price in advance before starting your journey. If you have not already booked a hotel then we recommend that you stay at one of the value for money hotels on the Sa Song Road which is a short walk from the Train Station. We recommend the Chaba Chalet on the Sa Song Road near the Night Market as a great place to stay for a night or two whilst you explore Hua Hin. 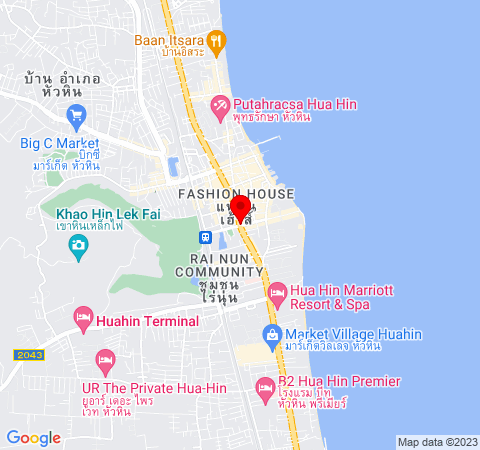