This is a relatively short journey and recommend taking Train #171 which completes the journey in a relatively quick 5 hours 35 minutes, avoids needed to get up early to get the 08.05 departure and arrives early evening ready to check into your hotel and shower before dinner. All other departures (except the early train) arrive after 20:30 in the evening which is less convenient.

It costs 250 THB to 400 THB more to buy a ticket online than it does to purchase a ticket at a train station in Thailand. The advantage of paying extra to buy a ticket in advance online is that you guarantee your seat on the train. Air-conditioned Sleepers and AC Seats on the fast train often sell out before the day of travel and if you do not book in advance you may only to be able to travel in fan cooled 3rd Class Seats which are very cheap but not very comfortable.

Located 240 km south of Bangkok Prachuap Khiri Khan is a largely undiscovered destination for foreign visitors, but is a popular destination for Thai holiday makers since King Rama V visited the nearby Praya Nakorn Cave in the late 1800s. The principle attractions of the town of Prachuap Khiri Khan are the wide sweeping beach with large limestone outcrops at both the Northern and Southern ends of the beach. 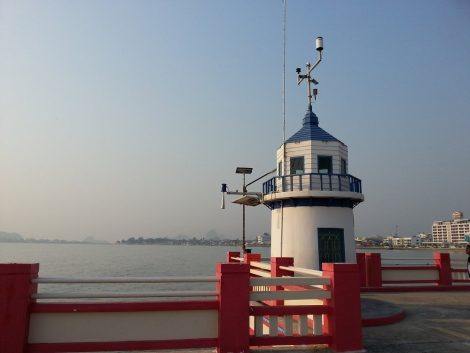 View from the Pier at Prachuap Khiri Khan

Prachuap Khiri Khan is a laid back fishing town which is yet to be overrun by tourists unlike the nearby towns of Hua Hin and Cha Am. The town itself has some charming wooden buildings and very affordable restaurants serving locally caught seafood. This is a great destination and foreign visitors who go before it becomes another destination on the tourist trail will be pleased that they did so. 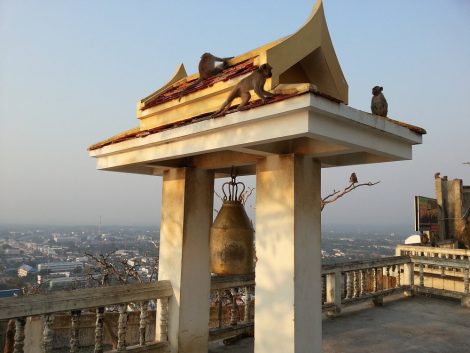 We advise visiting early in the morning between 07:00 and 08:00 before it becomes too hot to climb the 418 steps leading up to the temple. The monkeys are also more active in the morning while the weather is cooler and at this time of day you will normally see over 100 adult and young monkeys playing amongst the ruins.